Dartmouth and Jollimore were taking a good break from their daily teaching duties out in the staff room, making cups of coffee and tea respectively. They sat down beside each other on the big black sofa at the western end of the room, much to Dartmouth’s chagrin.

Just as he was supping the first sip of his freshly-brewed white latte, a somewhat concerned thought crossed Dartmouth’s ever-paranoid mind. “Jollimore,” he began, “you know those two teachers? The ones who are twin brothers?”

END_OF_DOCUMENT_TOKEN_TO_BE_REPLACED 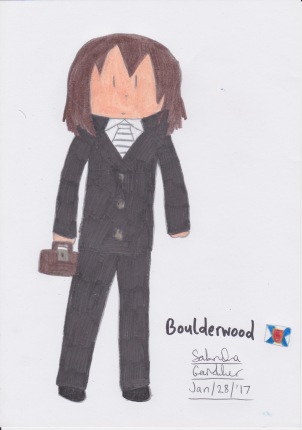 Rockingham is the first-born twin brother. He wears a medium-grey suit with colour-coordinated trousers, a white collared shirt underneath with a white-and-silver striped tie, and a pair of black laced shoes.

Boulderwood is the second-born twin brother. He wears a dark grey suit with a white-and-silver striped tie, a pair of black laced shoes, and carries around a suitcase, just like the first-born twin brother Rockingham.

After a little detour for the past couple of exhibitions, let’s get back on track to American Boys – or rather, its spin-off, The States Show.

Back in the State Boys Jelly Babies exhibition, a mysterious ‘new’ character appeared at the very end. (I put ‘new’ in quotes as it isn’t really new now, being eight years old.) This ‘new’ character, Puerto Rico, would later on himself become the star of a movie, All the Magic of Puerto Rico.

In this (planned) movie, the State Boys discover that a potential 51st state might be joining their 50-strong roster. It is then that Puerto Rico comes to them, like an angel. Thinking that he has some kind of magical prowess, the State Boys dog him at every step (or flap of his wings) of the way, wondering why he’s come to the city of America and why he sees the State Boys as his ‘chosen ones’.

Since Utah was my favourite State Boy back in the day, I decided to draw him alongside the star of the show in this promotional movie poster. There are literal stars beside Utah and above Puerto Rico, as well as in the movie logo, but I only drew those in as a way to fill in blank space. Also, four logos on one page seems a bit excessive… (This is partly why I no longer draw logos on my artworks, instead choosing to neatly sign them off with my signature and the date of creation, as is the tradition with artists.)

I also drew other promotional artworks for the movie, but they haven’t been scanned in yet, so they’ll be included in here as a gallery when I do have them scanned in.

It’s Burns Night again! Here’s a mini-gallery of some of my artworks celebrating Scottish brotherhood across the seas. As mentioned in the previous exhibition, the American Boys series wasn’t the only series of mine which began in 2009. During the first few months of that year, some other new characters came in to join my ever-growing roster.

With the first being the Alphabet Gang, the second were the Londoners. This series was a sort of spin-off of the Britain Boys series, but instead of focusing on the whole of the British Isles as Britain Boys did (mostly England), The Londoners focused solely on the capital city. Even Leyton makes a reappearance, albeit as an only child instead of having a brother in Stanmore, and her mother being Leytonstone (see what I did there?) instead of London. As the city of London is home to hundreds of districts, all with their own distinctive characteristics, this provided a perfect opportunity to create personifications of them all.

Acting on this, I set out on creating each character for the new Londoners series. So here’s the first generation! (See an explanation of what I mean by ‘generation’ here.)

Unfortunately, today only two Londoners artworks survive; these were some of the leftovers of the incident I describe here. All the others were lost to history forever, and faint memories are all that remain of them. The other Londoners artwork which survived the incident hasn’t yet been scanned in, but it’ll be exhibited once I get it up.