Today is my 22nd birthday!

22 years of making the world a more colourful and creative place. 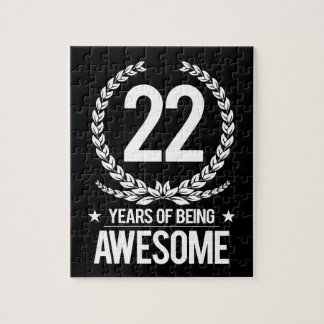 I now have a writing space on Wattpad!

Wattpad bills itself as the largest community of writers and readers online, which is perfect for those who work with the written word, like me.

I’ve already published a story on my own Wattpad, which of course had to be Life is a Beach:

More chapters and stories will soon be published!

A short time ago, I reviewed Numberblocks, the new CBeebies show starring the number pals of the Alphablocks, who make their own kind of magic by jumping on top of each other to make new, bigger numbers. While it hasn’t quite yet reached the level of popularity (at least with its very young target audience) as its parent show, it has nevertheless become a hit with both kids and parents alike in teaching them their 123s as well as their ABCs.

And with me, they’ve also gone down the same path as their letter friends in Alphaland… by becoming human!

Just like the humanized versions of their letter pals, the humanized Numberblocks take their looks, colours and personalities from their block forms. Although they do have eyes, mouths, arms and legs in block form, I decided that they’d have a lot more character if they were real people – sort of like if Lego characters become actual humans.

Unlike the humanized Alphablocks, however, the humanized Numberblocks don’t have ‘real’ names or ages. I thought it would be pretty silly if the Numberblocks were the same age as the number they’re supposed to represent, which would mean One would be one year old, Two would be two years old, and so on. The humanized versions of them look and act much older than that! 😉

Almost all of the human Numberblocks wear glasses; this is because I saw the little rims around their eyes when in block form as glasses – it’s most obvious on Two. Five and Ten’s glasses were probably the most fun to draw, since they have stars around their eyes, and I thought they could wear those ‘showbiz’ star spectacles in their human forms. (Which fits Five perfectly, since she plays in a band.) Three, being a clown, has a red hat and buttons, but no red nose in sight. She is the only one of the human Numberblocks who doesn’t wear glasses, because have you ever seen a clown wearing glasses? 😁

And one of her friends has even drawn the humanized Three in a ‘realistic’ style: 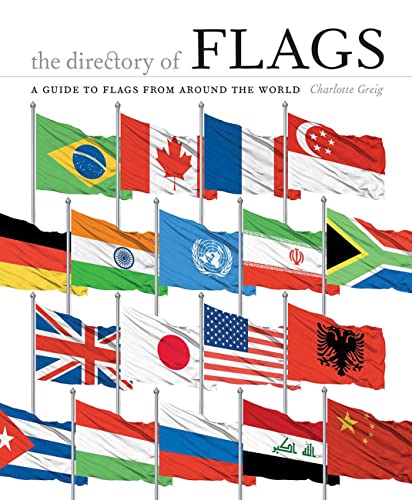 My first book review on this blog, and it just had to be about flags – which is one of my prime interests and inspirations… (See what I mean here.)

The Directory of Flags is a mini-encyclopedia of, what else, flags from around the world. It is compiled by Charlotte Greig, who as a child was fascinated by flags due to her father being an officer in the Navy, thus travelling all over to globe to new places. (Which sounds a lot like me, except my father wasn’t in the armed forces, and I just got into flags by myself.) First published in 2005, the encyclopedia has been recently updated to include more ‘modern’ history and political developments along with newer flags for newborn countries who have recently achieved independence. I think the new front cover design looks prettier, too.

Once you turn the page inside, a short history of flags is given, detailing why they are used as lasting symbols of our geography, nationality, beliefs and pride, and why some flags look the way they are. 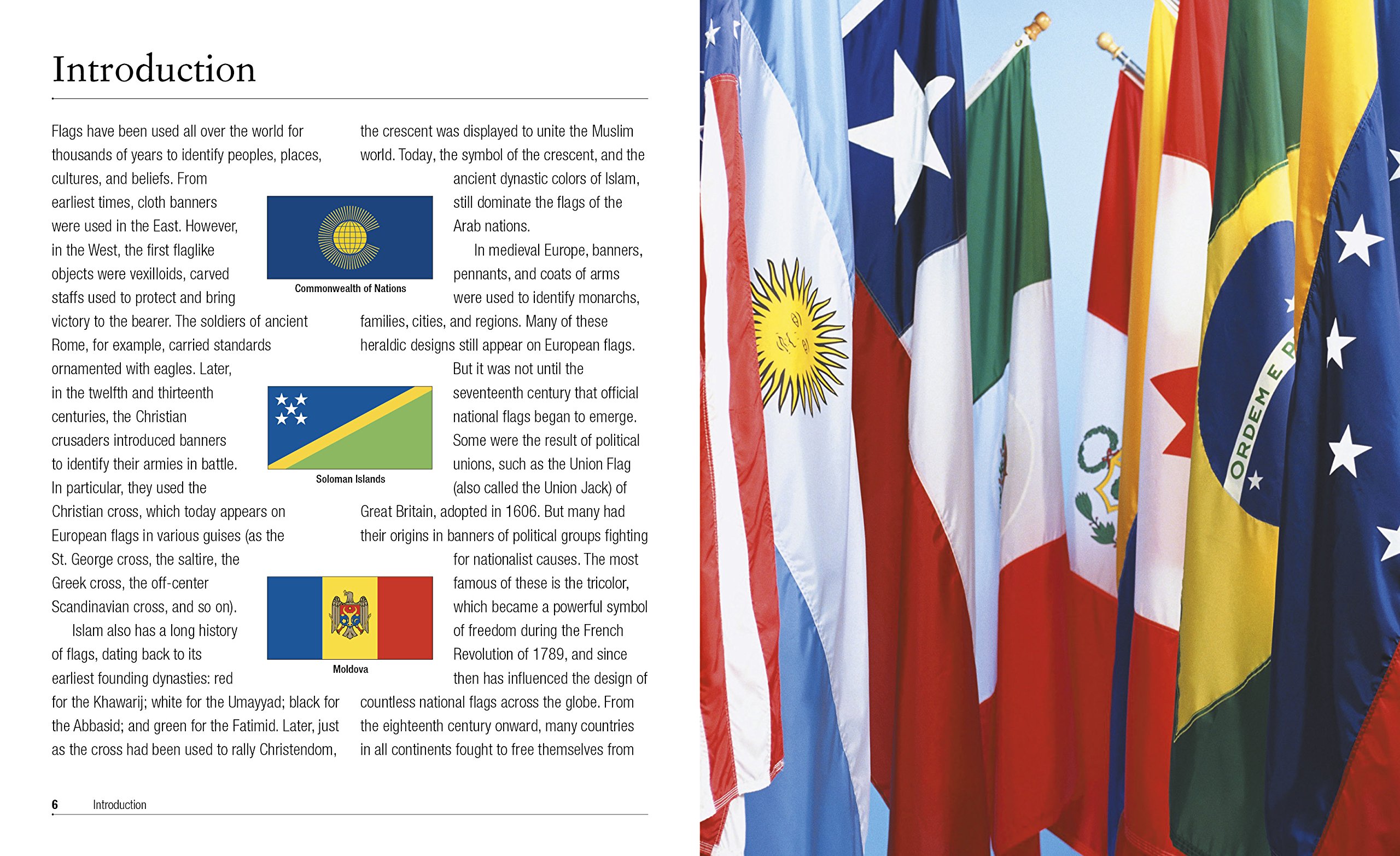 But this is the main show and attraction of this encyclopedia. Organized by continent (rather than in alphabetical order, as is the custom with most books on the countries of the world), each country gets a whole encyclopedia page of its own. (Smaller countries, such as islands, get much smaller entries.) They are illustrated with a beautiful header image of the selected country’s flag flapping about against a bright blue sky backdrop, together with a mini-map of the country and essential facts and figures, such as capital city, population, local currency and languages spoken. 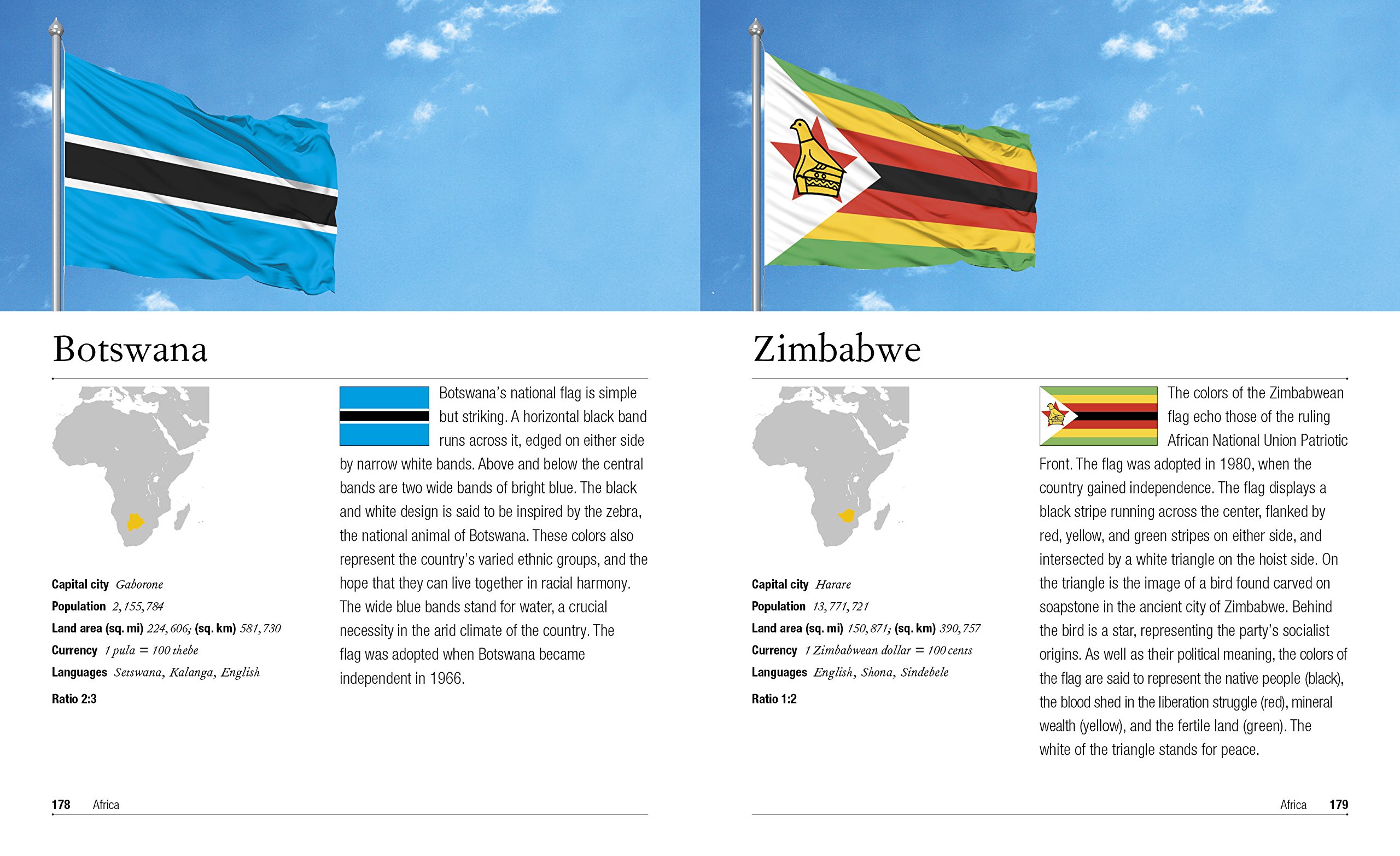 Not content with simply just showing the flag, this encyclopedia goes a little step further – it gives a little rundown of the geography and history of the selected country, then segues to the flag, its own history and its (general) interpretation. While some flags have an officially-given interpretation (i.e. given by their country’s government), others are simply left to the viewer to work out themselves. 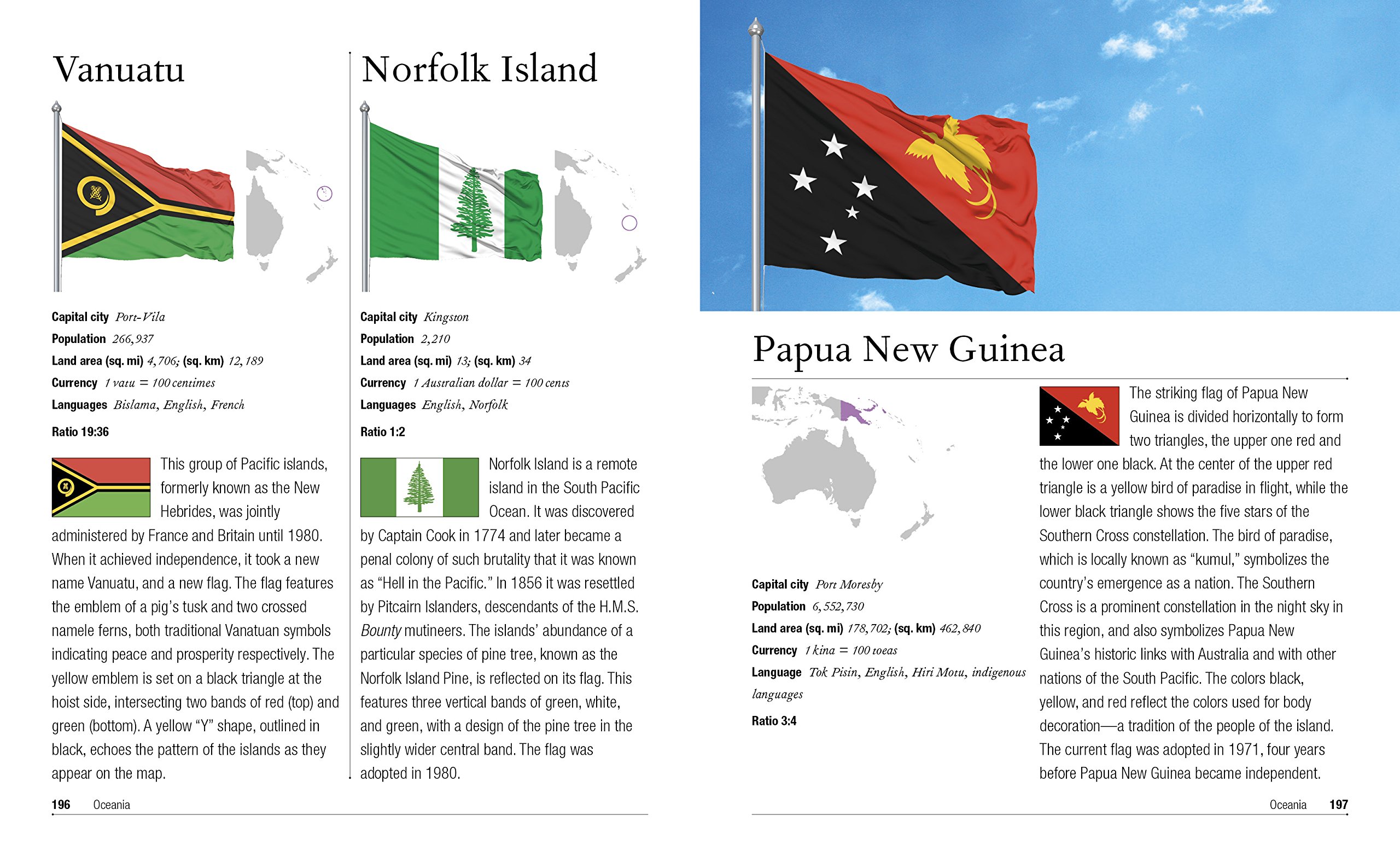 This, for me, is probably what the real beauty of flags is – decoding their meaning by looking at the colours, symbols and emblems used. A flag can represent not only a country, but also the pasts and wishes for the future of an entire people – which seems to be a recurring theme in the flags of many historically-underdeveloped countries which had been subject to totalitarianism. Peace, prosperity and nature/people are a few more recurring themes; the Bahamas’ flag is said to represent the heritage of its people (black), its golden sands (golden yellow) and its aquamarine seas (light blue). A similar concept happens with Barbados’ flag, where dark blue represents either the sea or sky and golden yellow represents the sandy beaches, with the fork of Triton/Neptune (the god of the sea) in the middle.

Although the encyclopedia has been updated twice, it strangely leaves out some newer countries which have been born in the past 10 years, such as Kosovo (born 2008) and South Sudan (born 2011). Instead, only Sudan gets a page of its own, and Kosovo is seemingly nowhere to be seen, with Albania taking its place. Timor-Leste (born 2002) does get an entry, however, as do most of the former Soviet republics who have since become their own country.

Also, the United States gets a few page spreads for the flags of each of its states and the United Kingdom also gets four pages for each of its respective countries, but Canada only gets one page. Which has spurred me on for an idea… How about I make a little book about Canada and its provinces and territories with their flags, since they each have a flag of their own? It’s an idea, and it could fill in the rather big gap… 🤔🍁🇨🇦