April is Autism Awareness Month, with World Autism Day held on the 2nd of April every year. More recently, however, it’s started to be rebranded by those who are #ActuallyAutistic (such as myself) as Autism Acceptance Day/Month, due to what some see as a negative connotation of the word “awareness”. While most people do mean well with raising awareness of autism, unfortunately this could mean they could be unwittingly spreading myths (no doubt influenced by Rain Man). Here, I’m going to look at five of the most common autism myths – and bust them.

Myth #1: Autism is just for boys

This is probably the most popular one. Most cultural depictions of autism show the “sufferer” (I hate using that word about someone with autism) as male, usually with social awkwardness or very fixed specific interests, a la Sheldon in The Big Bang Theory. While it is true that autism seems to occur more often in boys, girls can also be autistic (I’m living proof of that!) But because of society pushing the “autism is a boys’ thing” myth for so long, many girls on the spectrum may try to hide their autism to “fit in” with their neurotypical peers, and is a prime factor in why many females are diagnosed much later in life.

Myth #2: Autistic people have no empathy

In fact, I’ve often found it’s the exact opposite – autistic people are probably the kindest people around. Sometimes I say that I have too much empathy, but it’s better to have too much than none!

This one probably angers me the most. If you don’t know the story, in 1998, a man called Andrew Wakefield published a study in the medical journal The Lancet that supposedly linked being vaccinated – more specifically, having the MMR vaccines (for mumps and rubella) – with a higher risk of autism. The study has since been debunked and discredited by many in the medical and scientific communities, and subsequent studies have shown no evidence that autism is caused by vaccines. And with four vaccines for COVID-19 now widely available, it’s more important than ever to be protected – autistic or not.

Myth #4: Autistic people are all the same

There’s a reason why it’s called the autism spectrum. There are many different types of autism, including Asperger’s Syndrome, so why should they all be assimilated into one? Some may function almost like a neurotypical person (with some difficulties), while others may need constant care and support to do everyday things that most of us take for granted.

In short: no, it doesn’t. I’m 26 now and am still very much on the spectrum. While autism is often thought of as a childhood thing (my diagnosis even included “childhood autism”), there are a lot more autistic adults than children. Many studies on autism have only ever focused on children, with adults being left out, but there’s support for everyone on the spectrum – whether they’re six, 16, or 60! Becoming an adult does not magically “cure” autism (and many autistics don’t want a cure).

With these myths now busted, hopefully you’ll have become better informed about autism. But we don’t just want awareness – we want acceptance too.

Because awareness is just that – merely being aware of the existence of something, or someone. In this case, it’s just knowing that autism is a thing, and because most people’s “awareness” of autism most likely came from Rain Man, it can be peppered with demeaning and even damaging stereotypes, such as thinking those with autism are antisocial and are only interested in themselves and one thing. The very reason it’s often called “autism spectrum disorder” is that it’s a spectrum, no two people can have the same form of autism.

So I’m calling for World Autism Awareness Day to be renamed World Autism Acceptance Day. People need to stop seeing autism as a nasty ‘disease’ or ‘epidemic’ that is taking their children and grandchildren away from them and as a ‘burden’ on society. In fact, many on the spectrum are positively contributing to society, including myself, and it’s been proved in many studies that if a business has autistic employees, they create a much more inclusive and diverse work environment.

It’s time to start accepting autism as one of the many wonderful things that add colour and variety to the otherwise grey world of ‘normality’. That’s why it’s called a spectrum! 🌈

I don’t usually reblog posts from other people as I always strive to create my own content, but this is a special post for World Autism Awareness Day (today) and why Autism Speaks, one of the world’s leading autism charities, is generally reviled by autistic people themselves.

Instead of mere awareness, we also need acceptance. That’s why, from now on, I will call April ‘Autism Acceptance Month’ rather than just ‘Autism Awareness Month’.

Why a Rainbow for Autism?

Because autism is a spectrum – it isn’t just one colour.

For autism awareness and acceptance this April and all year round.

The 18th of June each year is designated as Autistic Pride Day. First observed in 2005 by the Aspies for Freedom online group, which sadly no longer exists, 2016 marks the 11th Autistic Pride Day. It aims to celebrate and recognize the talents of people who are living with an autism spectrum disorder (ASD) or Asperger’s Syndrome, like I am.

I have previously written about my experiences of living with autism for World Autism Awareness Day and Month in April of this year, but this time I want to be a little more positive about my life with the condition as today is meant to celebrate pride of being autistic. While of course autism presents me with various challenges, such as not being able to socialize as easily as ‘neurotypical’ people, difficulty in talking about things other than my special interests (namely Canada) and often feeling alone, it does come with many positives which help to compensate for the negatives.

If you’re a regular reader of mine, you’ll know that one of my biggest talents is writing, drawing and creating my own cartoon characters. My deep concentration on my creative works ever since I was a very little girl has helped me to hone my skills continuously over the years – something that has grown up with me well into my teens and early 20s (I’m currently 21 years old and I show absolutely no sign of stopping!) My special interests have played a significant role in this utmost determination to be creative, and with Canada, it’s no exception – currently six years and still ongoing. My never-ending love of Canada and never giving up on my wish to go there is what helped me to achieve my ultimate dream of seeing it in real life, with me visiting Nova Scotia in February this year. And I’m still wishing to see it again, though this time in the summer. 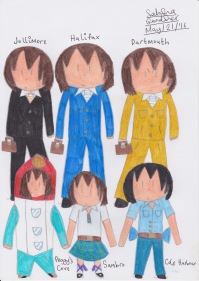 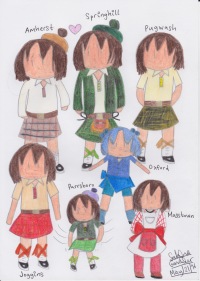 Peggy of the Cove

People on the autism spectrum often use anthropomorphization of inanimate objects and abstract concepts to help them understand the world better, and this is what I do on a daily basis, which of course includes geographical locations (especially Canada!) But it’s not just countries or cities and towns which I personify – I’ve also used this technique with the days of the week, months of the year, and even the letters of the alphabet. In 2013, I created Alphabet City, which follows 26 inhabitants of the eponymous city who are each given a name beginning with each letter of the alphabet from A to Z. (Their character profiles will be up on this blog a little later on!)

So as you can see, I’m a lot more than just a ‘girl with autism’ – I have my own personality, likes, dislikes and talents just like every other person around the world, whether autistic or not. But I’m proud to be autistic because of the ‘extra goodies’ it gifts me with. This is why I hate it when autism is referred to as a ‘disease’, but we all know it’s not, and so it can’t be cured. It is simply a part of us.

If there’s pride for those who are LGBT, then why shouldn’t there be pride for those living on the autism spectrum? We should stop seeing autism as a ‘tragedy’ and instead see the good side of the autistic community, and accept their autism as part of what makes them who they are. And that applies to me and everybody who I meet up with.

Let’s celebrate the wonderful world of autism and its amazing inhabitants!