I’m kicking off MerMay with the Cape Breton fiddling trio – Judique, Campbell and Lime Hill – as mermen! MerMay is a month-long celebration every May of all things mermaids, mermen and merfolk. 🧜🏻‍♂️🧜🏻🧜🏻‍♀️

This is a kind of follow-up to last year’s big artwork of all the Nova Scotians as merfolk, but I’ll now be drawing some of the characters individually. As I’ve changed Judique’s design since then (he now wears a yellow jacket in his normal form), he also has had a small change made to his merman form – he wears a yellow vest over his shirt, bringing his appearance more in line with the other two members of the gang.

Now they’re all ready to reel off some tunes under the sea! 🎻🌊

If you’ve been following my blog for the past couple of years, you may recognize the setting of the egg hunt; it’s the exact same place where Truro and Yarmouth had their wedding party last summer; the same bandstand, the fence, and the hydrangea bushes. Even the entrance arch still has wisteria growing on it, which was planted as part of Truro and Yarmouth’s wedding arch, but of course the buffet table and audio equipment are no longer there. There are, however, eggs of all different colours scattered around the garden, wild daisies popping up, and even a bunny as part of the Easter theme.

Due to current events surrounding the coronavirus (COVID-19), epidemic, why not have an Easter egg hunt at home? Simply hide some chocolate eggs in random places around the house (or even around the garden, if you have one), then send your family off on a fun hunt around the home. The results will be just as tasty!

Have a very Happy Easter, and don’t overdo the chocolate! 🤣

Bring out the fireworks and sparklers – it’s Bonfire Night again! 🎆🎇

In case you didn’t know, Bonfire Night – AKA Guy Fawkes Night – is an annual celebration held every 5th of November in the United Kingdom and some other Commonwealth territories. It commemorates the day Guy Fawkes and his gang of conspirators failed to bomb the Houses of Parliament in London in 1605, in an attempt to assassinate King James I of England. (I go into more detail on the origins of Bonfire Night in this post.)

With Canada being part of the Commonwealth, a leftover from the days of the British Empire, I was surprised to see that – with the exception of Newfoundland – Bonfire Night is almost relatively unknown across the Atlantic. While it’s not really about them or their parliament, I had wrongly assumed that it was a shared celebration across the Commonwealth, as they are all tied to Britain.

But geography doesn’t really matter, as some of the cast of A Nova Scotian Way of Life (ANSWOL) have come together for a fireworks show of their own. The fireworks were drawn with glitter pens, giving the impression that they’re “popping” out of the night sky. Westville and Parrsboro even have sparklers sizzling away while the bonfire burns bright. This is also Truro and Yarmouth’s first Bonfire Night as a married couple (it feels like it was their wedding just yesterday!)

If you’re having a bonfire or a fireworks display of your own, or are going to a public one, safety is always important. Why not see these safety tips?

Remember, remember the 5th of November – and to protect and enjoy yourself! 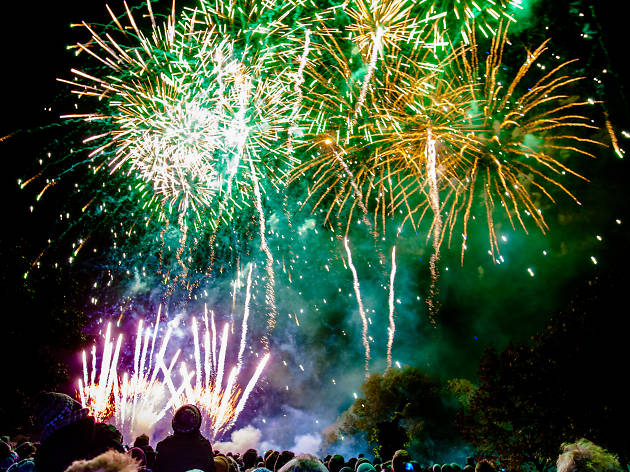