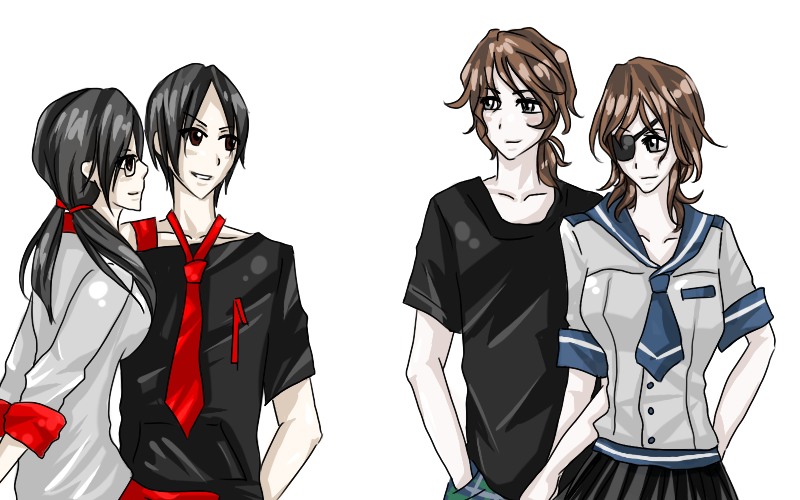 While Victoria laid out the turkey on a baking tray wrapped in tinfoil, she fetched some roast potatoes and mixed vegetables from the freezer, and gravy granules from the stockcupboard. She brought the kettle to the boil as she filled half of a glass jug with some of the gravy granules, pouring over the steaming water and whisking it together with a wooden spoon. Not wanting to waste any of the water, she used the remainder to make both herself and Vancouver two cups of hot cocoa.

Victoria set out the table and slid the turkey out of the oven. She carefully carved it into thick, juicy slices and dished out some of the potatoes and vegetables, finishing off with a drizzle of gravy. To apply the finishing touches, she set out a couple of mince pies onto a smaller plate in the centre – one for her and one for Vancouver.

Her boyfriend came rumbling down the stairs, now in his sleepwear and thick insulated ruby-red cotton socks.

“You’re in your pyjamas already? It’s only five in the afternoon.”

“Well, in the winter it gets darker earlier, right? And darkness to me means pyjama time,” Vancouver chuckled.

Victoria tut-tutted affably, igniting the scented candles to release their festive fragrances, and softly dimming the light. “That’s what I love about you, Vancouver – you’re just so simple-minded.”

“I hope that was meant as a compliment.” Vancouver grinned at his girlfriend as he sat down and they both began tucking in to their turkey dinners. He gobbled his up with extra lashings of gravy for added meatiness.

She carefully carried the candles across to the sitting room, the aromas wafting over, and gently dimmed the lights there too. Just as she set them down, she remembered the mince pies in the kitchen, so she lay another two out on the same plate and poured a fresh glass of milk. She left them out under the Christmas tree, switching the decorations on for the magic touch.

Vancouver slumped himself down on the couch, tightly swathing himself in his silky-soft, berry-red blanket while Victoria draped her own black and rose-pink blanket over herself. She lightly tapped the power button on the remote, and the couple began running their Christmas movie marathon, watching one holiday-themed movie after another to work up their excitement for tomorrow. They could watch all the fun in the snow and on the ice from the balminess and comfort provided by the cocoons of their blankets.

By the time of the third movie, Vancouver’s eyelids were weighing themselves down, and he inevitably dozed off. Victoria watched the rest of the festive movie selection alone with her snoozing, snoring boyfriend slouched beside her.

Five minutes to midnight. Victoria pinged the TV off and gently tapped Vancouver. He managed to shake himself awake for just a few more minutes while his girlfriend snuffed out the candles, and he heaved his tired, sagging body after her up the stairs and into their bedroom.

Just as they both hit the hay, a forceful thud and the clattering of what sounded like hooves rang out from the roof. Vancouver and Victoria’s eyes widened in awe, but decided to think nothing else of it, falling fast asleep for their safety.

Victoria was once again woken by her impatient boyfriend bouncing on her bed. She glimpsed back at the calendar from her pillow.

“You’re right, it IS Christmas.”

The couple made a mad dash downstairs to find the sitting room chock-a-block with presents of all shapes and sizes, the milk half-imbibed, and the mince pies nibbled into, leaving big bite marks on the shortcake pastry. They gasped in astonishment…

Vancouver and Victoria squeezed each other in the tightest embrace, and they promptly sat themselves down under the illuminated Christmas tree, eager to open their gifts. Just as he was about to open his first present of the day, Vancouver scratched his scalp. His girlfriend whipped over to him, seeming stunned.

“Vancouver? Did you just… scratch your head?” she asked.

“Yeah, I did,” Vancouver admitted, smiling rather ashamedly. “Must’ve been all the heat. Dried my scalp clean out.”

“Oh Vancouver,” Victoria laughed, playfully slapping her boyfriend on the back. He laughed too, and they started to unwrap all their gifts together as the billowing snow twinkled outside with the gleam of many crystals.

Vancouver and Victoria stepped inside a warm and comfy log cabin out of the biting winter cold, doubling up as a hot dog shack. They made their space in a corner decked with plump ruby red-leather sofas and armchairs, and embellished with fluffy down cushions of various shades of red from salmon through strawberry to mahogany.

“Yeah.” Vancouver nodded, breathing hot air into the palms of his gloves.

END_OF_DOCUMENT_TOKEN_TO_BE_REPLACED

Vancouver and Victoria ambled hand-in-hand down the iced streets of suburbia, the fresh snow softly and pleasantly crunching under the ridges of their hard soles. The frigid air steamed their every breath into diamond dust-like vapours. Tiny snowflakes settled upon their shoulders, melting almost instantaneously with their accumulated inner body heat.

Reaching the junction with the main street, which was heavier with Christmas Eve traffic on their way downtown, the teenaged couple made shelter at a nearby bus stop. They tightly hugged each other, and Vancouver tucked his head into Victoria’s wrapped arms to protect it from the cold. Some stray snowflakes gusted inside the shelter and onto Vancouver’s hair just beside the parting.

“I do? Nah, it’s snowflakes,” chuckled Vancouver, and he lightly scratched at his scalp to brush the snowflakes off.